President Akufo-Addo has approved a GHS15.6 billion request by the Finance Minister to support the financial sector.

According to a statement sighted by Citi News, the amount is to protect depositors and investors of the failed financial institutions as well as improve the liquidity of the sector.

The Banking sector has since 2017 seen series of clean up exercises carried out by the Bank of Ghana and the Security and Exchange Commission.

So far, the sector has seen the collapse of over 400 financial institutions.

The Finance Ministry, therefore believes that the requested amount will give the necessary support the sector requires to bounce back on its feet and be stronger.

A copy of the letter below; 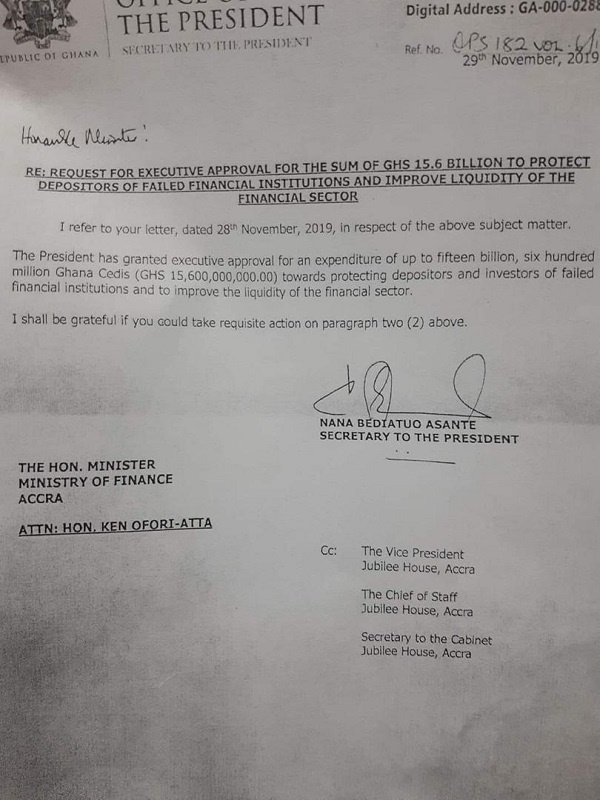 The most recent has to do with the Securities and Exchange Commission (SEC) revoking the licenses of some 53 Fund Management Companies.

The fund management companies who have lost their licenses were said to be managing a customer base of about 56,000 whose funds run in excess of GHS8 billion out of the total GHS25 billion of the entire securities sector.

SEC also explained that the revocation is “in accordance with its mandate of protecting investors and the integrity of the capital market.”

Customers of the various financial institutions whose licenses have been revoked over time have been left frustrated as calls to the institutions and the government to retrieve their monies have not yielded any positive results.

Some have embarked on series of demonstrations, while others have even threatened to boycott the national polls next year if the government fails to come to their aid.

An instance can be seen where hundreds of customers of some defunct Fund Management Companies were left stranded at validation centres in various parts of the country after trooping into selected branches of the Consolidated Bank Ghana Limited (CBG) as part of processes to retrieve their locked up monies.

SEC selected branches of CBG to receive claims from clients who have their funds locked up at the affected companies.

The banks were tasked to accept relevant documents for the validation of the investment claims.

Also, Gold Coast Fund Management, a member of Groupe Nduom, is one of the collapsed financial institutions. It struggled just like defunct GN Bank, which was downgraded to a Savings and Loans before its licensed was finally withdrawn by the Bank of Ghana.

After its collapse, aggrieved customers of the institution, as part of efforts to retrieve their locked up monies demonstrated in Accra months ago.