The Ghana Manganese Company Limited (GMC) has rejected allegations of infractions levelled against it by government.

“As a matter of fact, the price of Manganese ore sold is now determined by the GRA. As a company, we have little or no say in the fixing of the price. Therefore, the figures put out by the Minister [of Lands and Natural Resources] are inconsistent,” the company said in a statement.

Government through the Minister of Lands and Natural Resources, Kwaku Asomah Cheremeh, ordered the Ghana Manganese Company to shut down operations due to alleged nonpayment of taxes and price manipulation between the periods of 2010 to 2017.

The company has been under investigation since February 2019 after preliminary checks of its finances allegedly revealed several infractions.

“GMCL has not shown strong commitment to value addition in particular. There are also defaults by the company in the payment of annual minerals rights fees in excess of 4 million dollars. These and several infractions give me no option as the sector Minister than to close down the operations of GMCL.”

“The company is therefore instructed to stop all mining exploration and export of minerals effective 6th August 2019. The Ministry together with the Minerals Commission and other relevant stakeholders will immediately commence discussions with Ghana Manganese to resolve this and other outstanding issues in the course of the shutdown,” the Minister said at a press conference held on Tuesday.

But GMC in a statement signed by it’s Chief Operating Officer, Benjamin Atsu Quashie insisted that the company has always been tax compliant.

“We will like to put on record, therefore, that all our tax obligations up to date have been honoured. As a matter of fact, we are still waiting for an amount of $20 million in VAT refunds due us from the GRA between the periods of December 2018 and June 2019. The records are there for everyone to check at GRA. We believe that our sterling performance in honouring our tax obligation contributed to the GRA Bronze Award conferred on us for tax compliance in 2018.”

“The Minister’s mention of our indebtedness to some suppliers and its linkage to the supposed ‘statutory obligations’ all together necessitating the order to shut down the mine is very unfortunate as we see that as purely a matter of commerce. As good corporate citizens, we have continually engaged these vendors when we are unable to meet our side of the agreement, for alternative arrangements.”

Workers of the Ghana Manganese Company(GMC) in Tarkwa have been asked to go home until further notice.

The announcement was made when the Union and Management met the workers on Wednesday morning.

The Human Resource Manager of GMC Tarkwa, Adjei Mensah made the announcement after he informed them of government’s directive to them to shut down the company. 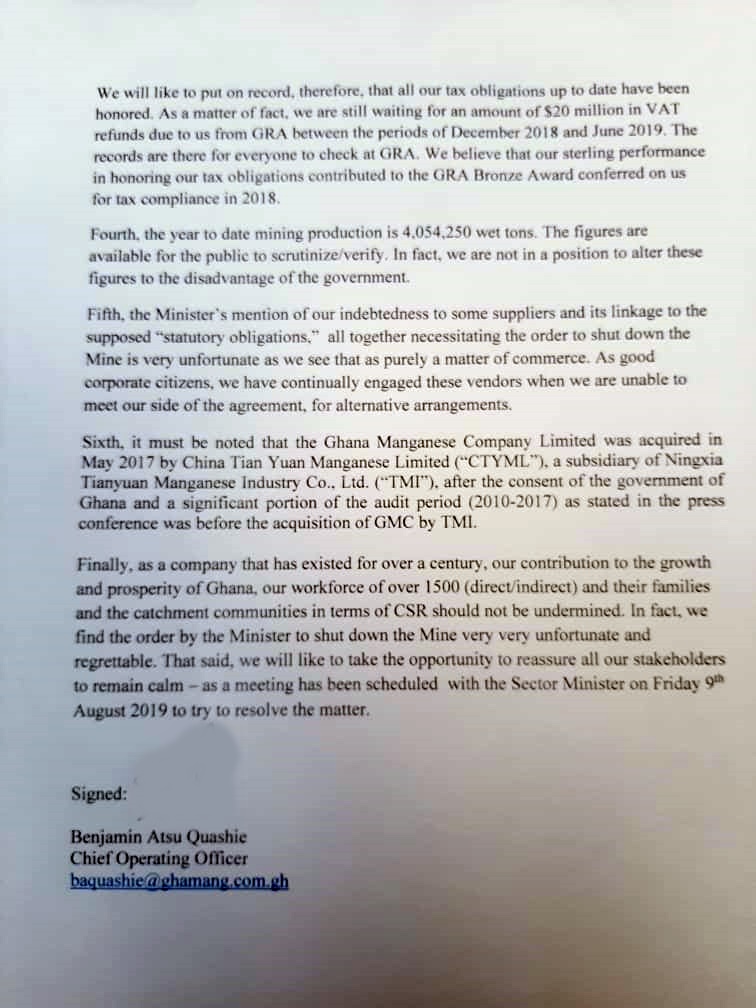