Activists in Sudan have used social media to organise protests and document confrontations with security forces in anti-government demonstrations that began in December over the price of bread. By STRINGER (AFP/File)

Despite a long-standing crackdown on dissent in Sudan, opponents of President Omar al-Bashir have found a voice online, using social media to fuel nationwide protests and share images of security forces using violence to suppress them.

The protests in Sudan began peacefully on December 19 to demonstrate against the tripling of the price of bread.

But they have evolved into deadly confrontations between demonstrators and security forces, and triggered calls for the downfall of the country’s veteran ruler.

“Social media is crucial for the movement,” said one 24-year-old activist, speaking with AFP in Cairo over WhatsApp. AFP has withheld his name for safety reasons.

For the past four weeks, activists have actively documented the confrontations and flooded social media with footage which they claim is “exposing” Bashir’s government.

The main cities of the northeast African nation, including the capital Khartoum and its twin city Omdurman, have all been rocked by what is now widely seen as the biggest threat to Bashir in his three decades of iron-fisted rule.

The 24-year-old protester said he only finds out about demonstrations through online announcements and maintained that anger at the “horrible” videos of deadly confrontations was driving more people out onto the streets.

One video purportedly showed a security vehicle chasing protesters to run them over, while gunshots were heard in the background.

Another clip showed people rushing to try to remove the blood-covered body of a protester hit by gunfire. Both have been viewed hundreds of times online.

Authorities say at least 24 people have died in the clashes, but rights groups including Amnesty International have put the death toll at 40 and say more than 1,000 people have been arrested.

On Friday during prayers at a mosque, irate crowds appeared in a video calling on an imam to lead protests against Bashir.

None of the footage could be independently verified by AFP.

Users have also shared multiple images of what appears to be security personnel beating up protesters with batons.

“We are people who don’t accept injustice. And what happened to protesters, whether it was tear gas or live bullets fired at them, is clear injustice,” said another social media activist based in Khartoum, who also spoke to AFP in Cairo and declined to be named fearing reprisals.

“Protests where violations occur are usually followed by larger ones,” the 25-year-old added.

The demonstrations have been spearheaded by the Sudanese Professionals’ Association (SPA) which regularly issues online announcements of upcoming rallies, with the hashtags #Sudan_cities_uprise or #Just_Fall. 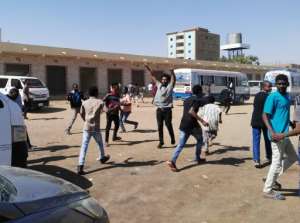 A picture taken on January 13, 2019 shows anti-government demonstrators in the Sudanese capital Khartoum. The writing on the shirt in Arabic reads: ‘I am a pacifist demonstrator’. By STRINGER (AFP/File)

Other hashtags such as #SudanRevolts and #SudanUprising have also helped build momentum, amassing hundreds of tweets and retweets by the hour.

Thanks to social media “the uprisings in the regional cities have been noticed a lot more quickly”, said Willow Berridge, a lecturer at Newcastle University in northern England.

And that “has had an impact on what is happening in Khartoum a lot more quickly because of the changing nature of technology and social media”.

With the protests showing no signs of abating, the Sudanese government has sought to curtail the use of social networks, activists and analysts said.

Internet users have reported difficulties accessing platforms such as Facebook, Twitter and WhatsApp since the early days of the protests.

It is not an unusual tactic by autocratic governments.

In the turbulent days of Egypt’s 2011 uprising against long-serving ruler Hosni Mubarak, the government blocked communications and cut off nearly all internet traffic.

Such experiences prompted Sudanese activists to immediately look for alternatives for online access, including the use of virtual private network (VPN) services to bypass controls.

“Shutting down access to online platforms has proved a farce,” said Magdi El Gizouli, a Sudan analyst with the Rift Valley Institute. 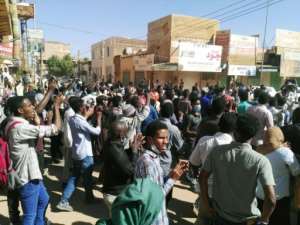 Sudanese protesters chant slogans during an anti-government demonstration in the capital Khartoum on January 6, 2019. By – (AFP/File)

“Almost immediately, the bulk of Sudanese internet users were online through VPN,” he added.

“It gave people an indication that the government is scared,” said the 25-year-old activist.

“This only strengthened the spirit of revolt in people, as it showed that we are on the right track.”

The 24-year-old also believes the restrictions on online media are “pointless” and have “little to no impact over the demonstrations”.

The government has in past years already moved to curtail online and print media.

In 2018, the country introduced a cybercrime law and amendments to the media law that rights groups see as aiming to tighten online restrictions.

According to a November report by the US-based think tank Freedom House, at least one person has been jailed “for critical commentary shared on social media” in Sudan, and authorities have arrested “numerous journalists and activists for alleged cybercrime.”

But Gizouli says the government’s attempts to crush online dissent have been “to no avail”.

“In many ways, these measures have only reinforced public anger at the government’s securitisation of the internet,” he said.