Majority Leader, Osei Kyei – Mensah Bonsu, has described the protest by Kumbungu Member of Parliament, Ras Mubarak against rising cost of living and the high cost of fuel as an act of “cheap populism.”

Ras Mubarak, on Tuesday morning, rode a bicycle for 17km to Parliament in protest of what he describes as rising cost of living and high cost of fuel.

Speaking to Citi News‘ Duke Opoku Mensah, the Majority Leader said the protest was unnecessary since Ras Mubarak knows that the government is not to blame for the increase in the price of petroleum products.

“He is entitled to his own behavior; he said fuel price had gone up; if he thinks the government should subsidize he should tell us. The depreciation of the cedi has affected the price and he knows this, when you know the truth but want to play to the gallery, then it is cheap populism,” he said.

Ras Mubarak said his action is intended to draw the government’s attention to the plight of Ghanaians.

He further rubbished suggestions that his decision to ride a bicycle to Parliament amounts to populism.

“My decision is to highlight the concerns of many Ghanaians who have had to complain about the rising cost of living in the country and are struggling to make ends meet. What we are experiencing is far from what this administration promised the good people of Ghana.”

“They promised us heaven and earth. Indeed, the President himself has admitted that times are hard. We will expect that he will apologize to the good people of Ghana for taking us for a ride. People are losing jobs, and you cannot say that anyone who is championing their cause is being a populist. As a representative of the people, If I cannot do something to highlight or showcase that I am indeed representing people, then I have no business being in public service,” he said. 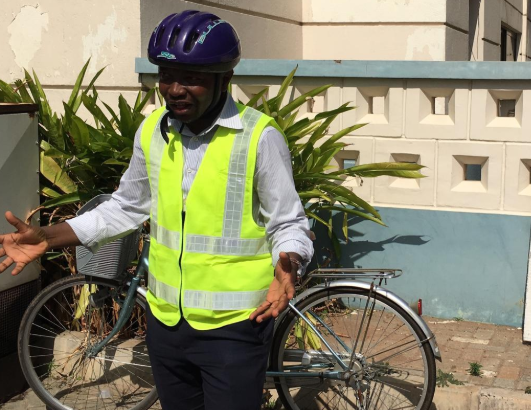 The prices of both petrol and diesel have risen by about 2.76 percent.

The price of petrol and diesel is currently pegged at about GH¢5.21 per litre, up from the previous price of GH¢5.07 per litre, despite a reduction in the price of crude oil on the international market.

Fuel prices went up in the last pricing window in the middle of October bringing a litre of both petrol and diesel to 5 cedis, 21 pesewas.